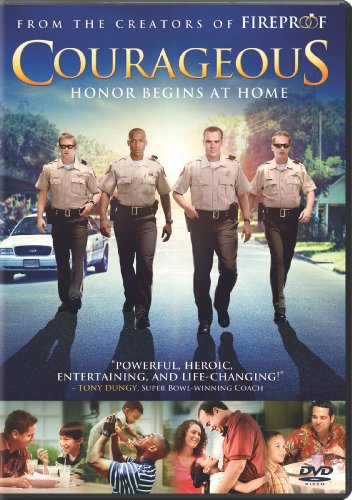 Diane Mitchell Director of Preschool Ministries
WHY I LIKE IT
This movie shares a courageous look at fatherhood and spiritual leader of the home.
SHARE
CATEGORIES
Parenting Movie
GET A COPY FROM AMAZON

Continue
What is the true mark of a man? The male stars of the moving sleeper hit Courageous are all sheriff's deputies in a small Georgia town, putting their lives on the line every day. Yet as Courageous deftly shows, the true measure of a man's courage and heart lies in the daily choices he makes, especially as a husband and father. Courageous is a film that examines faith, commitment, and the preciousness of life. If that sounds simplistic, Courageous, made by the same filmmakers who made the Christian film Fireproof and others, is in fact mostly nuanced, sophisticated, and very well acted. Directed by Alex Kendrick, who also cowrote the screenplay with his brother Stephen, and who costars as well, Courageous blends believable action scenes and drama with just enough comedy to keep things from being ponderous. The opening sequence, in fact, is one of the best car-chase scenes in recent film memory--and the "reveal" at its conclusion will bring tears to viewers' eyes. In fact, Courageous is a weeper of a film, but only because its message is so true and deeply felt. Each of the four deputies--played by Alex Kendrick, Ken Bevel, Kevin Downes, and Ben Davies--wrestles with choices big and small, and finds his faith tested in the darkest of times. Courageous is an excellent faith-based film suitable for teens and older (there's a death in the film that may be disturbing to very young viewers, though it's handled off-screen). The Blu-ray disc contains lots of extras, including a thoughtful commentary with Alex and Stephen Kendrick, a making-of featurette that's as inspiring as the film, outtakes, and a hilarious short called "Courageous in 60 Seconds" that underscores that the filmmakers have an all-important sense of humor. Anyone seeking a quality faith-based film experience will be enormously moved by the heart of Courageous. --A.T. Hurley
Four men, one calling: To serve and protect. As law enforcement officers, they are confident and focused, standing up to the worst the streets can offer. Yet at the end of the day, they face a challenge they’re ill prepared to tackle: fatherhood. When tragedy strikes home, these men are left wrestling with their hopes, their fears, their faith, and their fathering. Sherwood Pictures, creators of Fireproof, returns with this heartfelt, action-packed story. Protecting the streets is second nature to these law enforcement officers. Raising their children in a God-honoring way? That takes courage. Starring: Alex Kendrick, Kevin Downes, Ken Bevel, Robert Amaya, Ben Davies Director: Alex Kendrick Producer: Stephen Kendrick
MY CURRENT FAVORITES