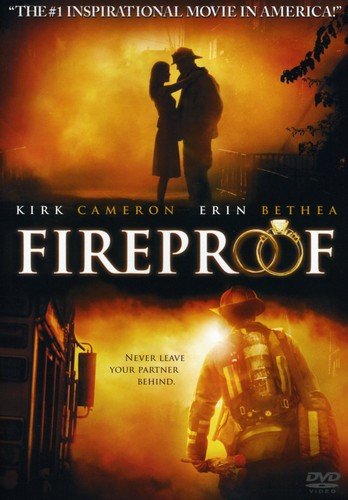 Diane Mitchell Director of Preschool Ministries
WHY I LIKE IT
The challenge of saving a marriage, a fireman finds God. He then is able to change and save his relationship with his wife.
SHARE
CATEGORIES
Movie
GET A COPY FROM AMAZON

Continue
A feel-good drama, Fireproof has a strong agenda: stay married, lead an honest life, and let your faith in a higher power help guide you. A still boyish-looking Kirk Cameron (Growing Pains) stars as Caleb Holt, a mercurial-tempered firefighter whose marriage is on the rocks. He clearly enjoys his status as a hero, but it comes at the expense of his marriage. His wife Catherine (Erin Bethea) is tired of the distance and wants him to make more of an effort at home, rather than surf porn on the Internet and hoard his earnings toward his dream fishing boat instead of helping out her disabled mother. Faced with impending divorce, Caleb's dad challenges him to follow the "40-day love dare," in which each task (cook her dinner, say nothing negative, etc.) is meant for him to better understand love and commitment and try and win his wife back. The third film by brothers Alex and Stephen Kendrick, Fireproof is the siblings' most polished feature. Cameron does a fine job of making Caleb real and believable, even when we're not always liking him. Though saddled at times with maudlin lines, Cameron adds emotion and range to his role. There is a not so subtle theme that the Holts--who at the beginning of the film are agnostic--needed religion to save their marriage. Clearly, Fireproof believes in its agenda and was made with the Christian audience in mind. Whether secular audiences will fall under its spell as well is debatable. But no one should walk away from the film offended. --Jae-Ha Kim

Kirk Cameron (Left Behind) stars as Caleb Holt, a heroic fire captain who values dedication and service to others above all else. But the most important partnership in his life, his marriage, is about to go up in smoke. This gripping story follows one man's desire to transform his life and marriage through the healing power of faith and fully embrace the fireman's code: Never Leave Your Partner Behind.
MY CURRENT FAVORITES