THE FIVE DYSFUNCTIONS OF A TEAM: A LEADERSHIP FABLE by Patrick Lencioni 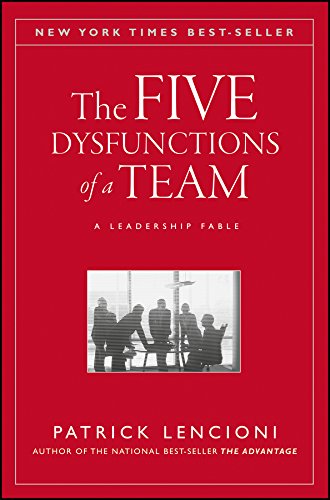 Jeff Stoll Executive Pastor of Communications
WHY I LIKE IT
This book directly and simply points out the most common problems teams face and the ways to overcome them.
SHARE
CATEGORIES
Leadership
GET A COPY FROM AMAZON

Continue
Once again using an astutely written fictional tale to unambiguously but painlessly deliver some hard truths about critical business procedures, Patrick Lencioni targets group behavior in the final entry of his trilogy of corporate fables. And like those preceding it, The Five Dysfunctions of a Team is an entertaining, quick read filled with useful information that will prove easy to digest and implement. This time, Lencioni weaves his lessons around the story of a troubled Silicon Valley firm and its unexpected choice for a new CEO: an old-school manager who had retired from a traditional manufacturing company two years earlier at age 55. Showing exactly how existing personnel failed to function as a unit, and precisely how the new boss worked to reestablish that essential conduct, the book's first part colorfully illustrates the ways that teamwork can elude even the most dedicated individuals--and be restored by an insightful leader. A second part offers details on Lencioni's "five dysfunctions" (absence of trust, fear of conflict, lack of commitment, avoidance of accountability, and inattention to results), along with a questionnaire for readers to use in evaluating their own teams and specifics to help them understand and overcome these common shortcomings. Like the author's previous books, The Five Temptations of a CEO and Obsessions of an Extraordinary Executive, this is highly recommended. --Howard Rothman
In The Five Dysfunctions of a Team Patrick Lencioni once again offers a leadership fable that is as enthralling and instructive as his first two best-selling books, The Five Temptations of a CEO and The Four Obsessions of an Extraordinary Executive. This time, he turns his keen intellect and storytelling power to the fascinating, complex world of teams.

Kathryn Petersen, Decision Tech's CEO, faces the ultimate leadership crisis: Uniting a team in such disarray that it threatens to bring down the entire company. Will she succeed? Will she be fired? Will the company fail? Lencioni's utterly gripping tale serves as a timeless reminder that leadership requires as much courage as it does insight.

Throughout the story, Lencioni reveals the five dysfunctions which go to the very heart of why teams even the best ones-often struggle. He outlines a powerful model and actionable steps that can be used to overcome these common hurdles and build a cohesive, effective team. Just as with his other books, Lencioni has written a compelling fable with a powerful yet deceptively simple message for all those who strive to be exceptional team leaders.
MY CURRENT FAVORITES