The Gospel Coalition » Bill Walsh » Churchill on Leadership : Executive Success in the Face of Adversity

CHURCHILL ON LEADERSHIP : EXECUTIVE SUCCESS IN THE FACE OF ADVERSITY by Steven F. Hayward 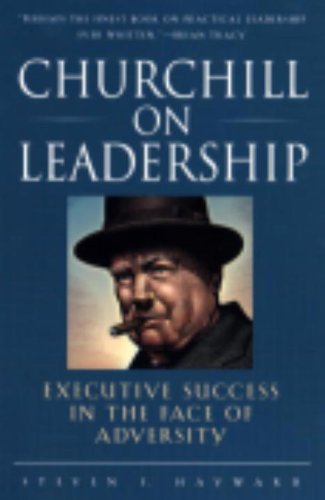 Continue
Scotch and cigars are making a popular comeback, so perhaps the time is ripe for the 20th century's most famous scotch-drinking and cigar-smoking leader to do the same. In the vein of the best-selling book Lincoln on Leadership, Steven F. Hayward looks at the much-studied Winston Churchill in a way nobody has before. Although Churchill on Leadership is pitched to a business audience, its lessons have a wider resonance. Churchill, of course, is best remembered as a political figure and wartime hero. Anybody who aspires to leadership can profit from this book, whether it's in the boardroom or the Oval Office.
Success often depends on the strength of a single quality: leadership. Winston Churchill is universally recognized as one of the 20th century's great political leaders and his words ring just as true in the world of commerce. A wise, witty, and inspiring leader, Churchill ran Great Britain like a great corporation.

Churchill on Leadership demonstrates that the principles that guided Churchill ably translate to private industry today. Author Steven F. Hayward gives strong evidence that, if you remove Churchill from his political context, he would have the resume to be among the great business leaders of any age. Churchill:
• was a financier (as chancellor of the Exechequer) and labor negotiator (as home secretary)
• managed a large transportation network (as head of the British Navy) and far-flung property holdings (as colonial secretary)
• persevered through bankruptcies and other financial disasters
• conceived and introduced innovative new products over the opposition of his colleagues, and reorganized major production operations in the midst of crisis.
With wit and insight, Hayward reveals Churchill's secrets for business success from assembling and inspiring a first-rate team to preparing a wise budget, from communicating a vision to structuring effective meetings, from acting decisively to rebounding from a failure. Laced with epochal events from the historical stage, enlivened with stimulating speculation, and leavened with wit, Churchill on Leadership is both an enjoyable read and a thought-provoking lesson on leadership.
MY CURRENT FAVORITES