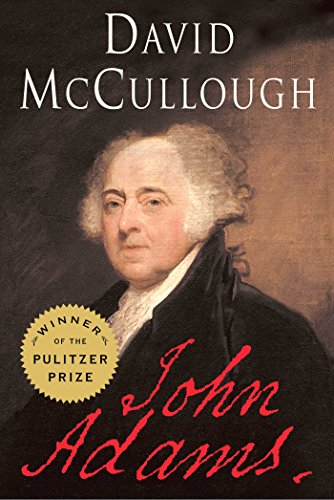 Continue
Left to his own devices, John Adams might have lived out his days as a Massachusetts country lawyer, devoted to his family and friends. As it was, events swiftly overtook him, and Adams--who, David McCullough writes, was "not a man of the world" and not fond of politics--came to greatness as the second president of the United States, and one of the most distinguished of a generation of revolutionary leaders. He found reason to dislike sectarian wrangling even more in the aftermath of war, when Federalist and anti-Federalist factions vied bitterly for power, introducing scandal into an administration beset by other difficulties--including pirates on the high seas, conflict with France and England, and all the public controversy attendant in building a nation.

Overshadowed by the lustrous presidents Washington and Jefferson, who bracketed his tenure in office, Adams emerges from McCullough's brilliant biography as a truly heroic figure--not only for his significant role in the American Revolution but also for maintaining his personal integrity in its strife-filled aftermath. McCullough spends much of his narrative examining the troubled friendship between Adams and Jefferson, who had in common a love for books and ideas but differed on almost every other imaginable point. Reading his pages, it is easy to imagine the two as alter egos. (Strangely, both died on the same day, the 50th anniversary of the Declaration of Independence.) But McCullough also considers Adams in his own light, and the portrait that emerges is altogether fascinating. --Gregory McNamee

The Pulitzer Prize–winning, bestselling biography of America’s founding father and second president that was the basis for the acclaimed HBO series, brilliantly told by master historian David McCullough.

In this powerful, epic biography, David McCullough unfolds the adventurous life journey of John Adams, the brilliant, fiercely independent, often irascible, always honest Yankee patriot who spared nothing in his zeal for the American Revolution; who rose to become the second president of the United States and saved the country from blundering into an unnecessary war; who was learned beyond all but a few and regarded by some as “out of his senses”; and whose marriage to the wise and valiant Abigail Adams is one of the moving love stories in American history.

This is history on a grand scale—a book about politics and war and social issues, but also about human nature, love, religious faith, virtue, ambition, friendship, and betrayal, and the far-reaching consequences of noble ideas. Above all, John Adams is an enthralling, often surprising story of one of the most important and fascinating Americans who ever lived.
MY CURRENT FAVORITES