BLOOD DONE SIGN MY NAME: A TRUE STORY by Timothy B. Tyson 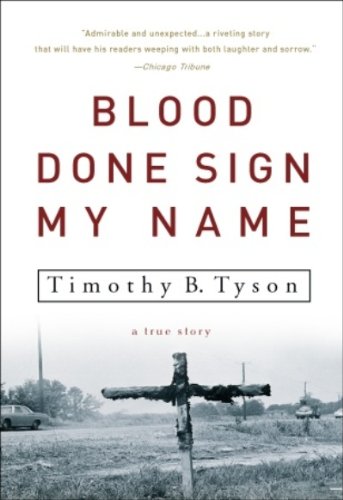 Collin Hansen Editorial Director
WHY I LIKE IT
There are too many stories like this from Southern history. But we must not forget them. If you've read about King and his era of the civil rights movement, you must follow up with this book.
SHARE
CATEGORIES
History
GET A COPY FROM AMAZON

If you ever wondered how racism could eat up the rural South during the Jim Crow era, Tyson offers a gripping front-line account that offers deep insights. Delightfully written in prose strikingly reminiscent of "To Kill a Mockingbird."

Continue
When he was but 10 years old, Tim Tyson heard one of his boyhood friends in Oxford, N.C. excitedly blurt the words that were to forever change his life: "Daddy and Roger and 'em shot 'em a nigger!" The cold-blooded street murder of young Henry Marrow by an ambitious, hot-tempered local businessman and his kin in the Spring of 1970 would quickly fan the long-flickering flames of racial discord in the proud, insular tobacco town into explosions of rage and street violence. It would also turn the white Tyson down a long, troubled reconciliation with his Southern roots that eventually led to a professorship in African-American studies at the University of Wisconsin-Madison--and this profoundly moving, if deeply troubling personal meditation on the true costs of America's historical racial divide. Taking its title from a traditional African-American spiritual, Tyson skillfully interweaves insightful autobiography (his father was the town's anti-segregationist Methodist minister, and a man whose conscience and human decency greatly informs the son) with a painstakingly nuanced historical analysis that underscores how little really changed in the years and decades after the Civil Rights Act of 1965 supposedly ended racial segregation. The details are often chilling: Oxford simply closed its public recreation facilities rather than integrate them; Marrow's accused murderers were publicly condemned, yet acquitted; the very town's newspaper records of the events--and indeed the author's later account for his graduate thesis--mysteriously removed from local public records. But Tyson's own impassioned personal history lessons here won't be denied; they're painful, yet necessary reminders of a poisonous American racial legacy that's so often been casually rewritten--and too easily carried forward into yet another century by politicians eagerly employing the cynical, so-called "Southern Strategy." --Jerry McCulley
“Daddy and Roger and ’em shot ’em a nigger.” Those words, whispered to ten-year-old Tim Tyson by a playmate, heralded a ?restorm that would forever transform the tobacco market town of Oxford, North Carolina.

On May 11, 1970, Henry Marrow, a twenty-three-year-old black veteran, walked into a crossroads store owned by Robert Teel and came out running. Teel and two of his sons chased and beat Marrow, then killed him in public as he pleaded for his life.

Like many small Southern towns, Oxford had barely been touched by the civil rights movement. But in the wake of the killing, young African Americans took to the streets. While lawyers battled in the courthouse, the Klan raged in the shadows and black Vietnam veterans torched the town’s tobacco warehouses. Tyson’s father, the pastor of Oxford’s all-white Methodist church, urged the town to come to terms with its bloody racial history. In the end, however, the Tyson family was forced to move away.

Tim Tyson’s riveting narrative of that fiery summer brings gritty blues truth, soaring gospel vision, and down-home humor to a shocking episode of our history. Like To Kill a Mockingbird, Blood Done Sign My Name is a classic portrait of an unforgettable time and place.
MY CURRENT FAVORITES