The Gospel Coalition » Collin Hansen » Divided by Faith: Evangelical Religion and the Problem of Race in America

DIVIDED BY FAITH: EVANGELICAL RELIGION AND THE PROBLEM OF RACE IN AMERICA by Michael O. Emerson Christian Smith 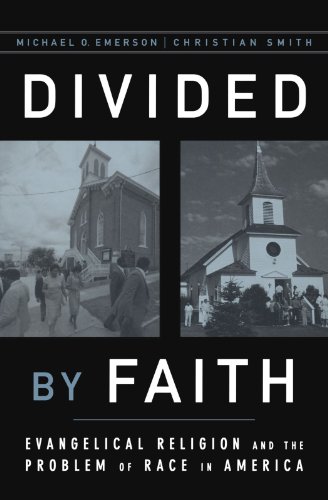 Collin Hansen Editorial Director
WHY I LIKE IT
I should have read this book 10 years ago. It has explanatory power.
SHARE
CATEGORIES
Leadership Relationships
GET A COPY FROM AMAZON

A friend I trust encouraged me to read this a couple months ago. Obviously relevant to life in 2016 America.

What these sociologists discovered was a genuine desire among evangelicals to end racial division and inequality, but also a theological worldview that hinders our ability to perceive systemic injustice, or offer solutions that go beyond cross-cultural friendships.

Continue
Through a nationwide telephone survey of 2,000 people and an additional 200 face-to-face interviews, Michael O. Emerson and Christian Smith probed the grassroots of white evangelical America. They found that despite recent efforts by the movement's leaders to address the problem of racial discrimination, evangelicals themselves seem to be preserving America's racial chasm. In fact, most white evangelicals see no systematic discrimination against blacks. But the authors contend that it is not active racism that prevents evangelicals from recognizing ongoing problems in American society. Instead, it is the evangelical movement's emphasis on individualism, free will, and personal relationships that makes invisible the pervasive injustice that perpetuates racial inequality. Most racial problems, the subjects told the authors, can be solved by the repentance and conversion of the sinful individuals at fault.
Combining a substantial body of evidence with sophisticated analysis and interpretation, the authors throw sharp light on the oldest American dilemma. In the end, they conclude that despite the best intentions of evangelical leaders and some positive trends, real racial reconciliation remains far over the horizon.