The Gospel Coalition » Collin Hansen » God's Own Party: The Making of the Christian Right

GOD'S OWN PARTY: THE MAKING OF THE CHRISTIAN RIGHT by Daniel K. Williams 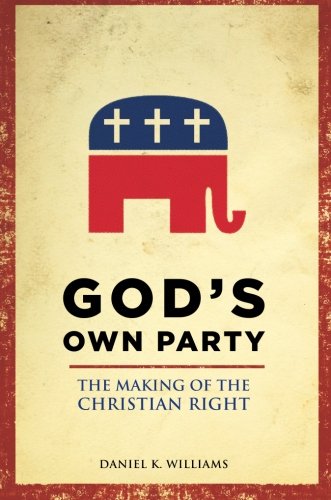 Collin Hansen Editorial Director
WHY I LIKE IT
This is probably the most widely cited historical survey of how the Republican Party became the political home of religious conservatives.
SHARE
CATEGORIES
History Politics
GET A COPY FROM AMAZON

Continue
When the Christian Right burst onto the scene in the late 1970s, many political observers were shocked. But, as God's Own Party demonstrates, they shouldn't have been. The Christian Right goes back much farther than most journalists, political scientists, and historians realize. Relying on extensive archival and primary source research, Daniel K. Williams presents the first comprehensive history of the Christian Right, uncovering how evangelicals came to see the Republican Party as the vehicle through which they could reclaim America as a Christian nation. A fascinating and much-needed account of a key force in American politics, God's Own Party is the only full-scale analysis of the electoral shifts, cultural changes, and political activists at the movement's core--showing how the Christian Right redefined politics as we know it.