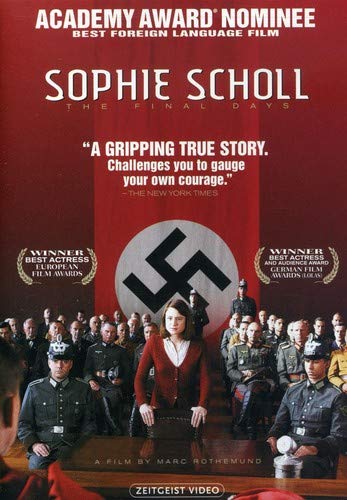 Collin Hansen Editorial Director
WHY I LIKE IT
This might be the best movie you didn't even know had been made. I walked away from this movie motivated to give my life for God in a cause far larger than myself. Not bad for a film.
SHARE
CATEGORIES
Movies History
GET A COPY FROM AMAZON

Continue
Through its simplicity and scrupulous attention to historical detail, Sophie Scholl: The Final Days proves to be both thrillingly suspenseful and emotionally devastating. During the peak of the Third Reich, Sophie Scholl (Julia Jentsch, The Edukators), along with her brother Hans and other students in Munich, formed a resistance group called the White Rose and distributed anti-Nazi leaflets. Sophie Scholl begins on a crisp winter day, with Sophie and Hans distributing leaflets around the empty halls of a university before class is let out. The tension only increases as they are arrested, interrogated, and swiftly convicted in a brutal show trial. The heart of the film are the scenes between Sophie and her interrogator, Robert Mohr (Gerald Alexander Held), a loyal Nazi who nonetheless respected and perhaps even admired Sophie. Their arguments, distilled down from hours of historical record, crackle with emotion and resonate throughout history, from Communist totalitarianism to the Bush administration condemning critics of the Iraq war as traitors. Jentsch's restrained performance only grows more and more moving over the movie's course. A deeply engaging and powerful movie. --Bret Fetzer
2005 Academy Award Nominee for Best Foreign Language Film, Sophie Scholl - The Final Days is the true story of Germany's most famous anti-Nazi heroine brought to thrilling, dramatic life. Sophie Scholl stars Julia Jentsch (of recent cult fave The Edukators) in a luminous performance as the fearless activist of the underground student resistance group, The White Rose. Armed with long-buried historical records of her incarceration, director Marc Rothemund expertly re-creates the last six days of Sophie Scholl's life: a heart-stopping journey from arrest to interrogation, trial and sentence in 1943 Munich. Unwavering in her convictions and loyalty to her comrades, her cross-examination by the Gestapo quickly escalates into a searing test of wills as Scholl delivers a passionate call to freedom and personal responsibility that is both haunting and timeless.
MY CURRENT FAVORITES