STAND FIRM YE BOYS FROM MAINE: THE 20TH MAINE AND THE GETTYSBURG CAMPAIGN by Thomas A. Desjardin 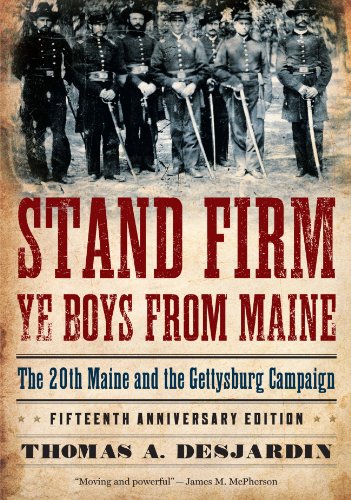 Collin Hansen Editorial Director
WHY I LIKE IT
Reached out to the author afterward for help in my own research, and he came through for me.
SHARE
CATEGORIES
History
GET A COPY FROM AMAZON

Continue
Fought amid rocks and trees, in thick blinding smoke, and under exceedingly stressful conditions, the battle for the southern slope of Little Round Top on July 2, 1863 stands among the most famous and crucial military actions in American history, one of the key engagements that led to the North's victory at Gettysburg.
In this powerfully narrated history, Maine historian Tom Desjardin tells the story of the 20th Maine Regiment, the soldiers who fought and won the battle of Little Round Top. This engaging work is the culmination of years of detailed research on the experiences of the soldiers in that regiment, telling the complete story of the unit in the Gettysburg Campaign, from June 21 through July 10, 1863. Desjardin uses more than seventy first-hand accounts to tell the story of this campaign in critical detail. He brings the personal experiences of the soldiers to life, relating the story from both sides and revealing the actions and feelings of the men from Alabama who tried, in vain, to seize Little Round Top. Indeed, ranging from the lowest ranking private to the highest officers, this book explores the terrible experiences of war and their tragic effect. Following the regiment through the campaign enables readers to understand fully the soldiers' feelings towards the enemy, towards citizens of both North and South, and towards the commanders of the two armies. In addition, this book traces the development of the legend of Gettysburg, as veterans of the fight struggle to remember, grasp, and memorialize their part in the largest battle ever fought on the continent.
With a new preface and updated maps and illustrations, Stand Firm Ye Boys of Maine offers a compelling account of one of the most crucial small engagements of the Civil War.