THE AMERICAN PRESIDENT: FROM TEDDY ROOSEVELT TO BILL CLINTON by William E. Leuchtenburg 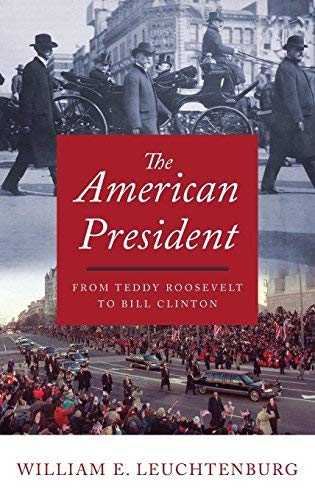 Collin Hansen Editorial Director
WHY I LIKE IT
The size doesn't suggest it, but this book is for general readers, not experts. Leuchtenburg is a legend in the field of presidential politics.
SHARE
CATEGORIES
History Politics
GET A COPY FROM AMAZON

I've always admired Leuchtenburg as a presidential historian. This book examines the personalities and conduct of each president of the twentieth century in a well-written book, with each profile possessing significant depth.

Continue
The American President is an enthralling account of American presidential actions from the assassination of William McKinley in 1901 to Bill Clinton's last night in office in January 2001. William Leuchtenburg, one of the great presidential historians of the century, portrays each of the presidents in a chronicle sparkling with anecdote and wit.

Leuchtenburg offers a nuanced assessment of their conduct in office, preoccupations, and temperament. His book presents countless moments of high drama: FDR hurling defiance at the "economic royalists" who exploited the poor; ratcheting tension for JFK as Soviet vessels approach an American naval blockade; a grievously wounded Reagan joking with nurses while fighting for his life.

This book charts the enormous growth of presidential power from its lowly state in the late nineteenth century to the imperial presidency of the twentieth. That striking change was manifested both at home in periods of progressive reform and abroad, notably in two world wars, Vietnam, and the war on terror.

Leuchtenburg sheds light on presidents battling with contradictory forces. Caught between maintaining their reputation and executing their goals, many practiced deceits that shape their image today. But he also reveals how the country's leaders pulled off magnificent achievements worthy of the nation's pride.