The Gospel Coalition » Collin Hansen » The Last Boy: Mickey Mantle and the End of America's Childhood

THE LAST BOY: MICKEY MANTLE AND THE END OF AMERICA'S CHILDHOOD by Jane Leavy 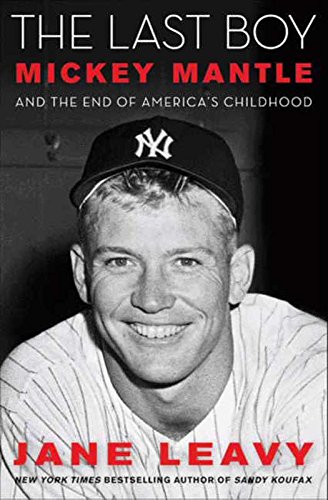 Collin Hansen Editorial Director
WHY I LIKE IT
Leavy memorably captures the innocence and debauchery of this golden era in the national pastime.
SHARE
CATEGORIES
Sports Biography
GET A COPY FROM AMAZON

Continue
Product Description
Jane Leavy, the acclaimed author of the New York Times bestseller Sandy Koufax: A Lefty's Legacy, returns with a biography of an American original—number 7, Mickey Mantle. Drawing on more than 500 interviews with friends and family, teammates, and opponents, she delivers the definitive account of Mantle's life, mining the mythology of The Mick for the true story of a luminous and illustrious talent with an achingly damaged soul.

Meticulously reported and elegantly written, The Last Boy is a baseball tapestry that weaves together episodes from the author's weekend with The Mick in Atlantic City, where she interviewed her hero in 1983, after he was banned from baseball, with reminiscences from friends and family of the boy from Commerce, Oklahoma, who would lead the Yankees to seven world championships, be voted the American League's Most Valuable Player three times, win the Triple Crown in 1956, and duel teammate Roger Maris for Babe Ruth's home run crown in the summer of 1961—the same boy who would never grow up.

As she did so memorably in her biography of Sandy Koufax, Jane Leavy transcends the hyperbole of hero worship to reveal the man behind the coast-to-coast smile, who grappled with a wrenching childhood, crippling injuries, and a genetic predisposition to alcoholism. In The Last Boy she chronicles her search to find out more about the person he was and, given what she discovers, to explain his mystifying hold on a generation of baseball fans, who were seduced by that lopsided, gap-toothed grin. It is an uncommon biography, with literary overtones: not only a portrait of an icon, but an investigation of memory itself. How long was the Tape Measure Home Run? Did Mantle swing the same way right-handed and left-handed? What really happened to his knee in the 1951 World Series? What happened to the red-haired, freckle-faced boy known back home as Mickey Charles?

"I believe in memory, not memorabilia," Leavy writes in her preface. But in The Last Boy, she discovers that what we remember of our heroes—and even what they remember of themselves—is only where the story begins.

For more than 30 years Bill Madden has covered the Yankees and Major League Baseball for the New York Daily News. The author of several books about the Yankees, including Steinbrenner: The Last Lion of Baseball, Madden is also the 2010 recipient of the Baseball Hall of Fame's J.G. Taylor Spink Award.


Madden: Your best-selling biography of Sandy Koufax was a tour de force, partly because Koufax was a very private man whose life story had never really been told before. Mickey Mantle’s life is quite the opposite, it’s been in the subject of a spate of different “autobiographies,” some of which he even wrote. Under those circumstances, what made you want to take up another book about him?

Leavy: Originally, I wanted to write about Willie, Mickey and The Duke in New York in the Fifties. The publisher said, “Do The Mick. Everybody loves The Mick.” I was wary because so much had been written about him—he left a paper trail as long as the drive from Commerce, Oklahoma to the Bronx, so I didn’t expect to learn that he’d been raised by a den of Alaskan she-wolves. My challenge was to strip away all the layers of myth that had accumulated and let Mickey breathe. And he, of all people, was my worst source. For example: the knee surgery he said he had after tripping over a drain in the 1951 World Series trying not to run into Joe DiMaggio in centerfield. In fact, he didn’t have surgery until two years later. I only learned that because I went through every day of the New York Times from October 1951 to November 1953 looking for the date the knife fell! That’s why this book took five years and nearly 600 interviews. I wanted to try to understand why after all these years, and all these revelations, Mickey Mantle still means so much to so many people—including me—and the first step was to get the basic facts straight.

Madden: You make the point early on in the book that Mickey was a childhood hero, but you also have a recurring sequence in the book of your first interview with him in Atlantic City in 1983, where—at one point—he drunkenly makes a pass at you. What lingering effect did this have on how you ultimately approached your book?

Leavy: I was plenty nervous when I met him. Mickey was my hero. But, he was also a very particular kind of role model. I was born two months prematurely (in a hospital a mile from Yankee Stadium) and came with some of the flaws that afflict those who don’t incubate as long as we’re supposed to. Mickey taught me how to function with pain and without complaint—his triumphs were mine. I was devastated with how he acted. After I’d taken his hand from my knee, I called the only person I could think of still awake at that hour, a new mother, who basically told me to grow up.

The next morning, over breakfast, I vented my anger and disappointment, railing at him for, among other things, greeting my youthful autograph request with flatulence. He was stunned and remorseful, albeit in a hilariously idiosyncratic manner. He gave me an 8 x 10 glossy that said, “Sorry, I farted, your friend, Mick.” For a moment, I felt I saw behind his crude façade. I decided the only way I could write this book was to acknowledge my lack of dispassion and scrutinize him completely. That’s what happened that weekend in Atlantic City. It forced me to see the world as it was, not how I wanted it to be.

Madden: One of the people I wish I'd been able to interview for my Steinbrenner book was Mantle, if only because I detected a very strained relationship between the two of them. Steinbrenner made a point to deify DiMaggio and had memorial services for Joe, Billy Martin, Roger Maris and Mel Allen, but did nothing for Mickey when he died. In your conversations with Mickey did he ever talk about Steinbrenner and anything that might have led to ill feelings toward each other?

Leavy: When I told Mantle I’d heard the Boss was thinking of turning Monument Park in centerfield into a water park for the disadvantaged youth of the South Bronx, Mantle was completely incredulous. He told me, “It was 480 in centerfield when I played. It’s 420 now and he’s talking about bringing them in farther,” and shook his head. “I was at a banquet one time and I said to him, ‘they ought to let those boys throw the ball up and hit it.’ That pissed him off.”

Mantle was interested in Yankee history—he grilled a friend who saw Babe Ruth lying in state in the rotunda at the Stadium about what it was like to be there that day. But I don’t think he had a whole lot of patience with “Yankeeography.” It was a quick disillusionment. When he signed with the Yankees, reporters asked which Yankee had been his childhood hero. He said, “Stan Musial.” George Weiss, the general manager, immediately “corrected” his memory and from then on Joe D. was his hero. Furthermore, I think he was deeply disappointed with the baseball community’s response—or lack of response—when commissioner Bowie Kuhn banned him in 1983 because of his affiliation with the Claridge Hotel and Casino, a job he had taken to pay for his son Billy’s treatment for non-Hodgkin’s Lymphoma. He told me, “I feel really kind of bad no one took up for me.” By “no one” I was pretty sure he meant Steinbrenner. The Yankees did little more than observe a moment of silence when Mantle died.

Madden: It would seem that most everybody pertinent to the book cooperated with you, especially the Mantle family. I was grateful for the cooperation I had from George Steinbrenner’s friends and associates when I wrote Steinbrenner, but I had an advantage that you didn’t in that most of them knew me personally and, I suppose, trusted me. As a stranger, did you meet any significant resistance?

Leavy: Danny and David Mantle—Mickey’s sons—and their late mother, Merlyn—were extremely generous with their recollections and insights. Their openness about their lives and their relationship with their father was extraordinary. Like him, they are extremely honest. There’s no put on, as folks in Commerce, Oklahoma like to say. I hope they’ll come away from the book with a deeper understanding of the forces that formed him and contributed to his downfall, but I don’t know how they’ll react.

Madden: This is the definitive “warts and all” biography of Mickey, with heavy emphasis on all of his demons. How do you think Mickey himself would feel about the book?

Leavy: I think it’s an honest book and Mantle was a very honest man. I don’t see this is as a dark book. I hope it’s enlightening in the most literal sense of the word and I hope that critics—and readers at large—will agree. I think the tragedy of Mantle is that he had so little time, at the beginning of his baseball career, and at the beginning of his sober life, to be his best self. He was a decent man who was genetically pre-disposed to alcoholism and enabled his whole life by the trappings of his celebrity. That’s his story. As Billy Crystal told me about his movie, 61*, Mickey wouldn’t have wanted the sugar coat.

His late wife, Merlyn, wrote about the sexual abuse he suffered as a young boy in the family memoir, “A Hero All His Life” and she elaborated on it when we spoke, as did several of his close friends. It turned out that his half sister wasn’t his only abuser and experts tell me that many of the destructive behaviors he manifested are seen in victims of childhood sexual abuse. So, I came away with enormous compassion for him and, I hope, with an answer to the question posed by one of his minor league teammates: “Mickey, what happened?”

Award-winning sports writer Jane Leavy follows her New York Times runaway bestseller Sandy Koufax with the definitive biography of baseball icon Mickey Mantle. The legendary Hall-of-Fame outfielder was a national hero during his record-setting career with the New York Yankees, but public revelations of alcoholism, infidelity, and family strife badly tarnished the ballplayer's reputation in his latter years. In The Last Boy, Leavy plumbs the depths of the complex athlete, using copious first-hand research as well as her own memories, to show why The Mick remains the most beloved and misunderstood Yankee slugger of all time.