The Gospel Coalition » Collin Hansen » The Righteous Mind: Why Good People Are Divided by Politics and Religion

THE RIGHTEOUS MIND: WHY GOOD PEOPLE ARE DIVIDED BY POLITICS AND RELIGION by Jonathan Haidt 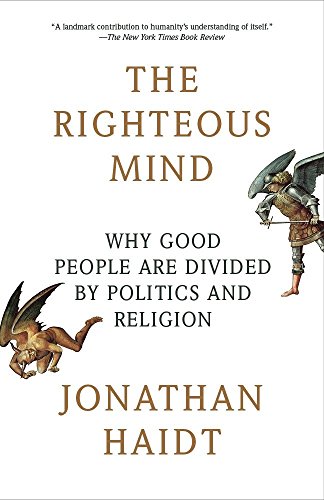 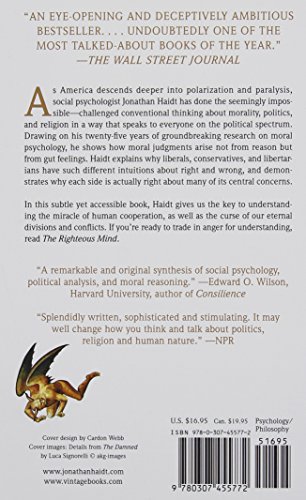 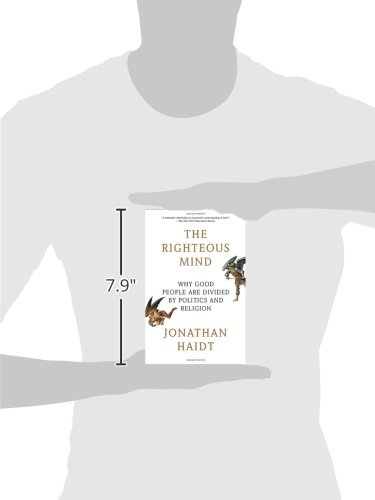 Collin Hansen Editorial Director
WHY I LIKE IT
Probably no single book has so powerfully and quickly changed my thinking. If you want to know why liberals and conservatives can't even talk to each other, read this book. Then you'll see how and why people really change their minds.
SHARE
CATEGORIES
Culture Philosophy Politics Religion
GET A COPY FROM AMAZON

Deeply illuminating and helpful for understanding our cultural moment, this book is basically about what the subtitle says. Haidt is exploring the motivations and reasons behind our ideological disagreements.

Haidt is a secular liberal who taught moral psychology at UVA and now teaches in Manhattan. Years ago he set out to determine why conservatives are so irrational and, in the process, came to realize they are actually operating out of a far "thicker" moral foundation. Whereas liberals tend to view morality through only two lenses (harm and fairness), conservatives tend to assess morality through these and other lenses (like loyalty, authority, and sanctity). A two-foundation morality versus a five- or six-foundation morality, in other words.

Haidt also offers trenchant insight into how to persuade those who don't already agree with you. Channeling Hume, he contends that our moral reasoning serves our intuitions, not the reverse. Our moral reasoning acts less like an impartial judge and more like a press secretary employed to justify what we're already inclined to believe. To persuade, then, we have to learn to appeal to and capture people's imaginations.

I finally read the book since (1) I'd heard Tim Keller reference it for years, (2) Collin Hansen swears by it, and (3) I saw Russell Moore call it "the most important book in years." It is indeed worth your time. Haidt is a refreshingly fair-minded secular liberal who, in some ways, seems not far from the kingdom.

Jonathan Haidt’s book provides a crash course in the psychology of human morality. Haidt believes human nature is not just intrinsically moral, but also “moralistic, critical, and judgmental”. In other words, “an obsession with righteousness (leading inevitably to self-righteousness) is the normal human condition."

As America descends deeper into polarization and paralysis, social psychologist Jonathan Haidt has done the seemingly impossible—challenged conventional thinking about morality, politics, and religion in a way that speaks to everyone on the political spectrum. Drawing on his twenty five years of groundbreaking research on moral psychology, he shows how moral judgments arise not from reason but from gut feelings. He shows why liberals, conservatives, and libertarians have such different intuitions about right and wrong, and he shows why each side is actually right about many of its central concerns. In this subtle yet accessible book, Haidt gives you the key to understanding the miracle of human cooperation, as well as the curse of our eternal divisions and conflicts. If you’re ready to trade in anger for understanding, read The Righteous Mind.