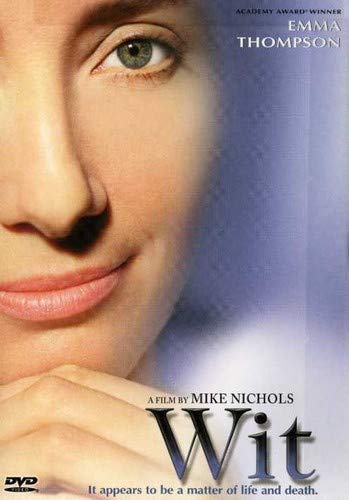 Collin Hansen Editorial Director
WHY I LIKE IT
Deals with heady, heavy themes. So be sure you're in the right temperament.
SHARE
CATEGORIES
Death
GET A COPY FROM AMAZON

Continue
Deservedly hailed as one of the best films of 2001, Wit makes it clear why top-ranking talents seek refuge in the quality programming of HBO. Unhindered by box-office pressures, director Mike Nichols and Emma Thompson turn the most unglamorous topic--the physical and psychological ravages of cancer--into an exquisite contemplation of life, learning, and tenacious, richly expressed humanity. In adapting Margaret Edson's compassionate, Pulitzer Prize-winning play, Nichols and Thompson open up the one-room setting with a superb supporting cast. But their focus remains on the hospital experience of Vivian (Thompson), a fiercely demanding professor of English literature whose academic specialty--the metaphysical poetry of John Donne--is the armor she wears against the cruel indignities of her cancer treatment. While losing all that she held dear, she reassesses her life as an aloof intellectual, and Wit illuminates her bracingly eloquent and deeply moving struggle for dignity, meaning, and peace at life's ultimate crossroads. --Jeff Shannon
Wit (DVD)

Based on the 1999 Pulitzer Prize-winning play by Margaret Edson, WIT features the Academy Award winning actress Emma Thompson in a movie directed by Academy award winning director Mike Nichols. Vivian Bearing is an English professor with a biting wit that educates but also alienates her students. With her teaching and life both rigidly under control, Vivian would never let down her defenses, until the day comes when they are taken don for her. Diagnosed with a devastating illness, Vivian agrees to undergo a series of procedures that are brutal, extensive, and experimental. For eight months her life must take an uncharted course. No longer a teacher, but a subject for others to study. Vivian Bearing is about to discover a fine line between life and death that can only be walked with wit.