The Gospel Coalition » Dan Olson » The Abolition of Man

THE ABOLITION OF MAN by C. S. Lewis 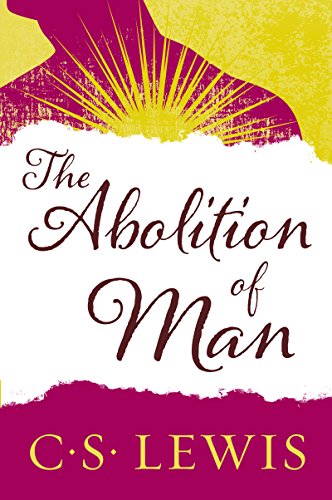 Dan Olson Director of Advancement
WHY I LIKE IT
This and The Discarded Image are probably the two of Lewis's more academic works that I appreciate the most. This is a wholesale and trenchant critique of modern approaches to education. Two phrases that stick with me are "the head rules the belly through the chest" and, "for the ancients, the chief goal was conforming the soul to reality". The appendix on the Tao is a fascinating compendium.
SHARE
CATEGORIES
Discipleship General Interest
GET A COPY FROM AMAZON

Continue
C.S. Lewis's The Abolition of Man purports to be a book specifically about public education, but its central concerns are broadly political, religious, and philosophical. In the best of the book's three essays, "Men Without Chests," Lewis trains his laser-sharp wit on a mid- century English high school text, considering the ramifications of teaching British students to believe in idle relativism, and to reject "the doctrine of objective value, the belief that certain attitudes are really true, and others really false, to the kind of thing the universe is and the kinds of things we are." Lewis calls this doctrine the "Tao," and he spends much of the book explaining why society needs a sense of objective values. The Abolition of Man speaks with astonishing freshness to contemporary debates about morality; and even if Lewis seems a bit too cranky and privileged for his arguments to be swallowed whole, at least his articulation of values seems less ego-driven, and therefore is more useful, than that of current writers such as Bill Bennett and James Dobson. --Michael Joseph Gross

In the classic The Abolition of Man, C.S. Lewis, the most important Christian writer of the 20th century, sets out to persuade his audience of the importance and relevance of universal values such as courage and honor in contemporary society. Both astonishing and prophetic, The Abolition of Man is one of the most debated of Lewis’s extraordinary works. National Review chose it as number seven on their "100 Best Nonfiction Books of the Twentieth Century."