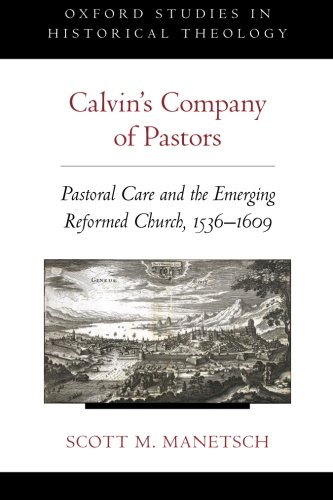 Ivan Mesa Editor
WHY I LIKE IT
I think every pastor, at whatever stage, will find great encouragement from this academic work. Every pastor should be well grounded in his knowledge of history, and what better era than Calvin's Geneva. This is one of my favorite books I've read this year.
SHARE
CATEGORIES
History
GET A COPY FROM AMAZON

The Reformation was a recovery of the great doctrines of Scripture and justification by faith. But it was also a recovery of a biblical understanding of the pastoral ministry, the pastor as a herald of the gospel, an under-shepherd of God's sheep, and a public theologian. This book examines how the pastoral office developed around Calvin and Calvin's Geneva, showing how the a biblical vision of the pastorate emerged alongside a mature understanding of the gospel.

Continue
In Calvin's Company of Pastors, Scott Manetsch examines the pastoral theology and practical ministry activities of Geneva's reformed ministers from the time of Calvin's arrival in Geneva until the beginning of the seventeenth century. During these seven decades, more than 130 men were enrolled in Geneva's Venerable Company of Pastors (as it was called), including notable reformed leaders such as Pierre Viret, Theodore Beza, Simon Goulart, Lambert Daneau, and Jean Diodati. Aside from these better-known epigones, Geneva's pastors from this period remain hidden from view, cloaked in Calvin's long shadow, even though they played a strategic role in preserving and reshaping Calvin's pastoral legacy.

Making extensive use of archival materials, published sermons, catechisms, prayer books, personal correspondence, and theological writings, Manetsch offers an engaging and vivid portrait of pastoral life in sixteenth- and early seventeenth-century Geneva, exploring the manner in which Geneva's ministers conceived of their pastoral office and performed their daily responsibilities of preaching, public worship, moral discipline, catechesis, administering the sacraments, and pastoral care. Manetsch demonstrates that Calvin and his colleagues were much more than ivory tower theologians or "quasi-agents of the state," concerned primarily with dispensing theological information to their congregations or enforcing magisterial authority. Rather, they saw themselves as spiritual shepherds of Christ's Church, and this self-understanding shaped to a significant degree their daily work as pastors and preachers.
MY CURRENT FAVORITES