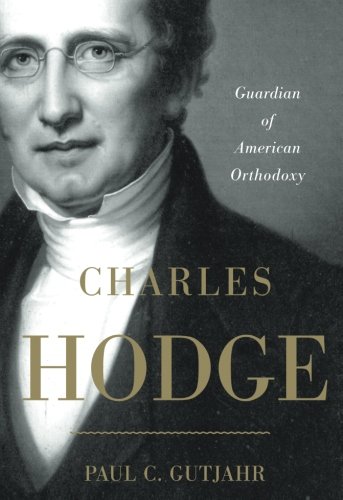 Ivan Mesa Editor
WHY I LIKE IT
Excellent read! Concise chapters, engaging style, meticulous research, edifying subject, and powerful life. "Posterity might remember Hodge for his magnificent mind, but for those who knew him best, what set him apart was his even-more-magnificent heart."
SHARE
CATEGORIES
Biography
GET A COPY FROM AMAZON

Continue
Charles Hodge (1797-1878) was one of nineteenth-century America's leading theologians, owing in part to a lengthy teaching career, voluminous writings, and a faculty post at one of the nation's most influential schools, Princeton Theological Seminary. Surprisingly, the only biography of this towering figure was written by his son, just two years after his death. Paul C. Gutjahr's book is the first modern critical biography of a man some have called the "Pope of Presbyterianism."

Hodge's legacy is especially important to American Presbyterians. His brand of theological conservatism became vital in the 1920s, as Princeton Seminary saw itself, and its denomination, split. The conservative wing held unswervingly to the Old School tradition championed by Hodge, and ultimately founded the breakaway Orthodox Presbyterian Church.

The views that Hodge developed, refined, and propagated helped shape many of the central traditions of twentieth- and twenty-first-century American evangelicalism. Hodge helped establish a profound reliance on the Bible among Evangelicals, and he became one of the nation's most vocal proponents of biblical inerrancy. Gutjahr's study reveals the exceptional depth, breadth, and longevity of Hodge's theological influence and illuminates the varied and complex nature of conservative American Protestantism.
MY CURRENT FAVORITES