The Gospel Coalition » Ivan Mesa » The Christian Ministry: With an Inquiry Into the Causes of Its Inefficiency (Classic Reprint)

THE CHRISTIAN MINISTRY: WITH AN INQUIRY INTO THE CAUSES OF ITS INEFFICIENCY (CLASSIC REPRINT) by Charles Bridges 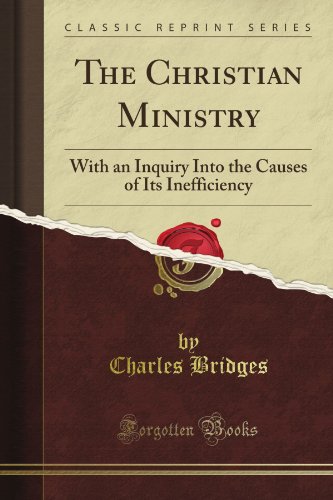 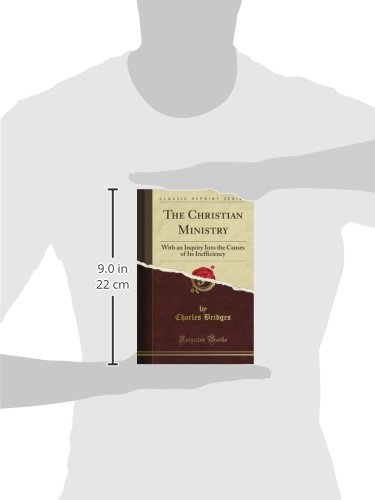 Continue
The Work now presented to the Public originated in a letter to a beloved friend upon the interesting subject of Ministerial inefficiency; which, at his desire, and by the disinterested kindness of the Editor of the-C hristian Observer, was subsequently inserted with a few enlargements in that valuable Miscellany ;and an impression taken from thence for private circulation. Several applications having been made for its separate publication, the Writer was induced to reconsider the subject in a more extended range, and to avail himself of the suggestions of friends, until the small pamphlet has gradually swelled into its present extended dimensions. As to the Work itself the Writer desires to be with his brethren in weakness, and in fear, and much trembling. He is aware that his proper situation, both in authority and experience, is at the feet of many, who are thus constrained to listen to him ;and it would be to him a subject of the most painful regret, if he were supposed to advance any pretensions to a standard of zeal, earnestness, or Ministerial attainment, above his brethren. He has not described what he is, but what he ought, and what he trusts he desires to be ;and if, (after the model of the Country Parson) he has set the mark as high as he could ;it is, because he shoots higher that threatens the moon, than he that aims at a tree. He has endeavoured, however, to write in the first instance for himself; and to point every arrow of conviction at his own heart Thou that teachest another, teachest thou not thyself? The Writer will be found to have dealt rather largely in illustration not only, as being more suited to his relative situation with his brethren than didactic instruction ;but as exhibiting that sympathy of care and anxiety, which gives to us a peculiar place in each others remembrance, an interest in each others prayers, and a witness in eac
(Typographical errors above are due to OCR software and don't occur in the book.)
MY CURRENT FAVORITES