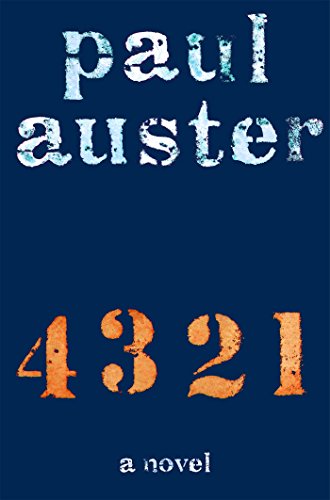 An Amazon Best Book of February 2017: Paul Auster’s 4321 is his first novel in seven years, and it feels extra personal. Details of a life spent growing up in Brooklyn—of loving the Brooklyn Dodgers, Laurel and Hardy, summer camp—are laid out with the earnest intensity of a writer looking back on his life. Plot points arise—for instance, a person is killed by lightning—which mimic more unique moments from Auster’s own life experience. At nearly 900 pages, it is also a long novel—but a reason for that is 4321 tells the story of its protagonist, Archie Ferguson, four different times. What remains consistent throughout Archie’s life (or lives) is that his father starts out with the same career, Archie falls in love with the same girl, and his personality seems more nature than nurture. But those are starting off points, and if our lives are the sum of our choices, they are the sum of other people’s choices as well. Circumstances matter, and what will keep you thinking about this book is the convergence of time and circumstance within each of Archie’s different lives. His past propels him, his circumstances form him, and regardless of which life we are reading, time will ultimately take him. --Chris Schluep, The Amazon Book Review

A New York Times Bestseller | A Los Angeles Times Bestseller
A Boston Globe Bestseller | A National Indiebound Bestseller
The Millions’s “Most Anticipated;” Vulture’s “Most Exciting Book Releases for 2017;” The Washington Post’s Books to Read in 2017; Chicago Tribune’s “Books We’re Excited About in 2017;”
Town & Country's "5 Books to Start Off 2017 the Right Way;" Read it Forward, Favorite Reads of January 2017

“A stunningly ambitious novel, and a pleasure to read. . . . An incredibly moving, true journey.”―NPR

Paul Auster’s greatest, most heartbreaking and satisfying novel―a sweeping and surprising story of birthright and possibility, of love and of life itself.

Nearly two weeks early, on March 3, 1947, in the maternity ward of Beth Israel Hospital in Newark, New Jersey, Archibald Isaac Ferguson, the one and only child of Rose and Stanley Ferguson, is born. From that single beginning, Ferguson’s life will take four simultaneous and independent fictional paths. Four identical Fergusons made of the same DNA, four boys who are the same boy, go on to lead four parallel and entirely different lives. Family fortunes diverge. Athletic skills and sex lives and friendships and intellectual passions contrast. Each Ferguson falls under the spell of the magnificent Amy Schneiderman, yet each Amy and each Ferguson have a relationship like no other. Meanwhile, readers will take in each Ferguson’s pleasures and ache from each Ferguson’s pains, as the mortal plot of each Ferguson’s life rushes on.

As inventive and dexterously constructed as anything Paul Auster has ever written, yet with a passion for realism and a great tenderness and fierce attachment to history and to life itself that readers have never seen from Auster before. 4 3 2 1 is a marvelous and unforgettably affecting tour de force.