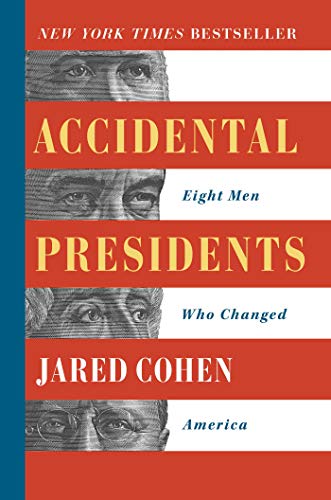 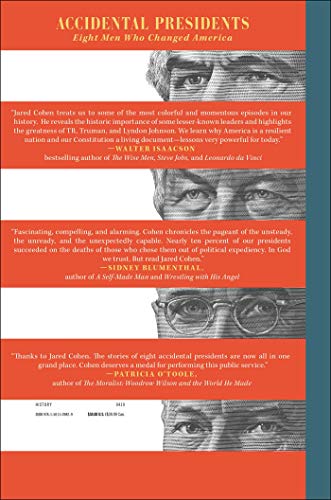 The strength and prestige of the American presidency has waxed and waned since George Washington. Accidental Presidents looks at eight men who came to the office without being elected to it. It demonstrates how the character of the man in that powerful seat affects the nation and world.

Eight men have succeeded to the presidency when the incumbent died in office. In one way or another they vastly changed our history. Only Theodore Roosevelt would have been elected in his own right. Only TR, Truman, Coolidge, and LBJ were re-elected.

John Tyler succeeded William Henry Harrison who died 30 days into his term. He was kicked out of his party and became the first president threatened with impeachment. Millard Fillmore succeeded esteemed General Zachary Taylor. He immediately sacked the entire cabinet and delayed an inevitable Civil War by standing with Henry Clay’s compromise of 1850. Andrew Johnson, who succeeded our greatest president, sided with remnants of the Confederacy in Reconstruction. Chester Arthur, the embodiment of the spoils system, was so reviled as James Garfield’s successor that he had to defend himself against plotting Garfield’s assassination; but he reformed the civil service. Theodore Roosevelt broke up the trusts. Calvin Coolidge silently cooled down the Harding scandals and preserved the White House for the Republican Herbert Hoover and the Great Depression. Truman surprised everybody when he succeeded the great FDR and proved an able and accomplished president. Lyndon B. Johnson was named to deliver Texas electorally. He led the nation forward on Civil Rights but failed on Vietnam.

Accidental Presidents adds immeasurably to our understanding of the power and limits of the American presidency in critical times.
MY ESSENTIALS