The Gospel Coalition » Jeff Robinson » I Never Had It Made: An Autobiography of Jackie Robinson

I NEVER HAD IT MADE: AN AUTOBIOGRAPHY OF JACKIE ROBINSON by Jackie Robinson Alfred Duckett 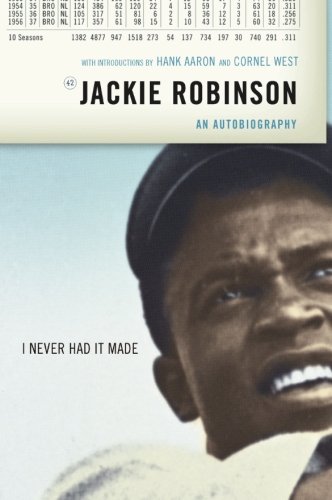 Jeff Robinson Senior Editor
WHY I LIKE IT
An in-depth account of the hellish racism Robinson faced while facing down Jim Crowe in Major League Baseball. Robinson was an important, but often unaccounted for, figure in the civil rights movement in America.
SHARE
CATEGORIES
General Interest
GET A COPY FROM AMAZON

Before Barry Bonds, before Reggie Jackson, before Hank Aaron, baseball's stars had one undeniable trait in common: they were all white. In 1947, Jackie Robinson broke that barrier, striking a crucial blow for racial equality and changing the world of sports forever. I Never Had It Made is Robinson's own candid, hard-hitting account of what it took to become the first black man in history to play in the major leagues.

I Never Had It Made recalls Robinson's early years and influences: his time at UCLA, where he became the school's first four-letter athlete; his army stint during World War II, when he challenged Jim Crow laws and narrowly escaped court martial; his years of frustration, on and off the field, with the Negro Leagues; and finally that fateful day when Branch Rickey of the Brooklyn Dodgers proposed what became known as the "Noble Experiment"—Robinson would step up to bat to integrate and revolutionize baseball.

More than a baseball story, I Never Had It Made also reveals the highs and lows of Robinson's life after baseball. He recounts his political aspirations and civil rights activism; his friendships with Martin Luther King, Jr., Malcolm X, William Buckley, Jr., and Nelson Rockefeller; and his troubled relationship with his son, Jackie, Jr.

Originally published the year Robinson died, I Never Had It Made endures as an inspiring story of a man whose heroism extended well beyond the playing field.