The Gospel Coalition » Jeff Robinson » The General vs. the President: MacArthur and Truman at the Brink of Nuclear War

THE GENERAL VS. THE PRESIDENT: MACARTHUR AND TRUMAN AT THE BRINK OF NUCLEAR WAR by H. W. Brands 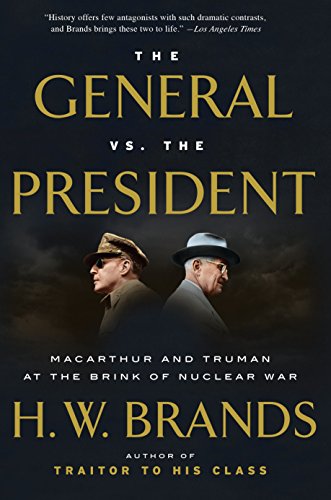 Jeff Robinson Senior Editor
WHY I LIKE IT
The tenuous relationship between Douglas MacArthur and Harry Truman brought the world to the brink of nuclear war, but the story hasn't been often told. Brands writes history like a novelist and the drama builds as he toggles back and forth between these two massive personalities and their disagreement that jeopardized world peace, a technique that makes the book difficult to put down.
SHARE
CATEGORIES
General Interest Leadership
GET A COPY FROM AMAZON

At the height of the Korean War, President Harry S. Truman committed a gaffe that sent shock waves around the world, when he suggested that General Douglas MacArthur, the willful, fearless, and highly decorated commander of the American and U.N. forces, had his finger on the nuclear trigger. At a time when the Soviets, too, had the bomb, the specter of a catastrophic third World War lurked menacingly close on the horizon. A correction quickly followed, but the damage was done; two visions for America’s path forward were clearly in opposition, and one man would have to make way.

The contest of wills between these two titanic characters unfolds against the turbulent backdrop of a faraway war and terrors conjured at home by Joseph McCarthy. From the drama of Stalin’s blockade of West Berlin to the daring landing of MacArthur’s forces at Inchon to the shocking entrance of China into the war, The General and the President vividly evokes the making of a new American era.