The Gospel Coalition » Joe Carter » Modern Times Revised Edition: The World from the Twenties to the Nineties (Perennial Classics)

MODERN TIMES REVISED EDITION: THE WORLD FROM THE TWENTIES TO THE NINETIES (PERENNIAL CLASSICS) by Paul Johnson 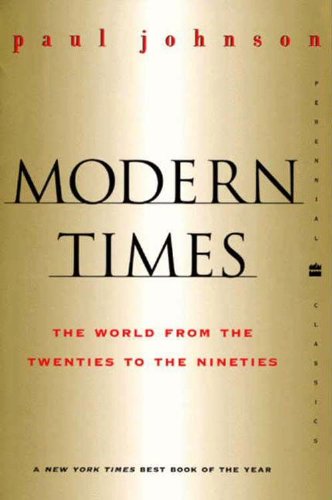 Joe Carter Editor
WHY I LIKE IT
The essential work of history for understanding the modern age.
SHARE
CATEGORIES
History
GET A COPY FROM AMAZON

Continue
The history of the 20th century is marked by two great narratives: nations locked in savage wars over ideology and territory, and scientists overturning the received wisdom of preceding generations. For Paul Johnson, the modern era begins with one of the second types of revolutions, in 1919, when English astronomer Sir Arthur Eddington translated observations from a solar eclipse into proof of Albert Einstein's general theory of relativity, which turned Newtonian physics on its head. Eddington's research became an international cause célèbre: "No exercise in scientific verification, before or since, has ever attracted so many headlines or become a topic of universal conversation," Johnson writes, and it made Einstein into science's first real folk hero.

Einstein looms large over Johnson's narrative, as do others who sought to harness the forces of nature and society: men like Mao Zedong, "a big, brutal, earthy and ruthless peasant," and Adolf Hitler, creator of "a brutal, secure, conscience-less, successful, and, for most Germans, popular regime." Johnson takes a contentious conservative viewpoint throughout: he calls the 1960s "America's suicide attempt," deems the Watergate affair "a witch-hunt ... run by liberals in the media," and deems the rise of Margaret Thatcher a critical element in Western civilization's "recovery of freedom"--arguable propositions all, but ones advanced in a stimulating and well-written narrative that provides much food for thought in the course of its more than 800 pages. --Gregory McNamee

The classic world history of the events, ideas, and personalities of the twentieth century.