The Gospel Coalition » Melissa Kruger » A Gentleman in Moscow: A Novel

A GENTLEMAN IN MOSCOW: A NOVEL by Amor Towles 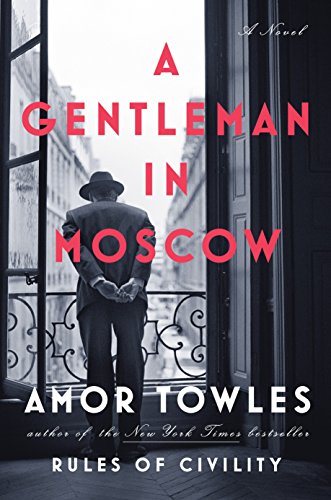 Melissa Kruger Author
WHY I LIKE IT
I looked forward to reading this book every evening and hated for it to be over. It's beautifully written and delightful to read.
SHARE
CATEGORIES
Fiction
GET A COPY FROM AMAZON

Continue
An Amazon Best Book of September 2016: A Gentleman in Moscow is the utterly entertaining second novel from the author of Rules of Civility. Amor Towles skillfully transports us to The Metropol, the famed Moscow hotel where movie stars and Russian royalty hobnob, where Bolsheviks plot revolutions and intellectuals discuss the merits of contemporary Russian writers, where spies spy, thieves thieve and the danger of twentieth century Russia lurks outside its marbled walls. It’s also where wealthy Count Alexander Rostov lives under house arrest for a poem deemed incendiary by the Bolsheviks, and meets Nina. Nina is a precocious and wide-eyed young girl who holds the keys to the entire hotel, wonders what it means to be a princess, and will irrevocably change his life. Despite being confined to the hallway of the hotel, the Count lives an absorbing, adventure-filled existence, filled with capers, conspiracies and culture. Alexander Rostov is a character for the ages--like Kay Thompson’s Eloise and Wes Anderson’s M. Gustav, he is unflinchingly (and hilariously for readers) devoted to his station, even when forced to wait tables, play hide and seek with a young girl, or confront communism. Towles magnificently conjures the grandeur of the Russian hotel and the vibrancy of the characters that call it home. --Al Woodworth, The Amazon Book Review
A New York Times bestseller

Chosen as a best book of the year by NPR, The Washington Post, The Chicago Tribune, The San Francisco Chronicle, and The Philadelphia Inquirer

“’The Grand Budapest Hotel’ and ‘Eloise’ meets all the Bond villains.” –TheSkimm

“Irresistible. . .[an] elegant period piece. . .as lavishly filigreed as a Faberge egg.”
–O, the Oprah Magazine

He can’t leave his hotel. You won’t want to.

In 1922, Count Alexander Rostov is deemed an unrepentant aristocrat by a Bolshevik tribunal, and is sentenced to house arrest in the Metropol, a grand hotel across the street from the Kremlin. Rostov, an indomitable man of erudition and wit, has never worked a day in his life, and must now live in an attic room while some of the most tumultuous decades in Russian history are unfolding outside the hotel’s doors. Unexpectedly, his reduced circumstances provide him entry into a much larger world of emotional discovery.

Brimming with humor, a glittering cast of characters, and one beautifully rendered scene after another, this singular novel casts a spell as it relates the count’s endeavor to gain a deeper understanding of what it means to be a man of purpose.

“And the intrigue! … [A Gentleman in Moscow] is laced with sparkling threads (they will tie up) and tokens (they will matter): special keys, secret compartments, gold coins, vials of coveted liquid, old-fashioned pistols, duels and scars, hidden assignations (discreet and smoky), stolen passports, a ruby necklace, mysterious letters on elegant hotel stationery… a luscious stage set, backdrop for a downright Casablanca-like drama.” –The San Francisco Chronicle
MY CURRENT FAVORITES